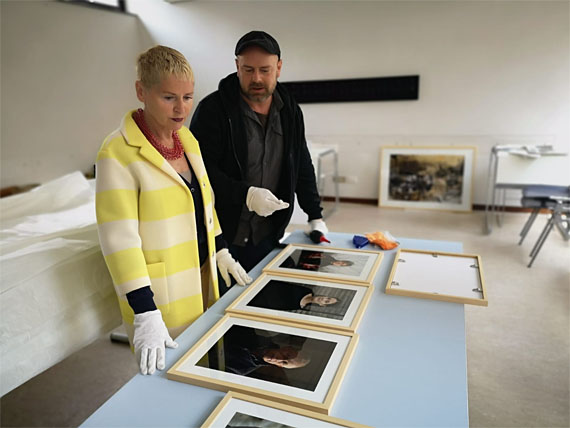 On the tenth anniversary of the devastating earthquake in Onna, the Goethe-InstitutRome asked the photographic artist Göran Gnaudschun to produce an exhibition on the past and present of Onna’s village community. Voci che si cercano (Voices Seeking One Another) will be on display from 6 April to 15 September 2019 at the Casa Onna Community Centre. In a conversation with The Latest at Goethe, Gnaudschun talks about his encounters with the people of Onna and how they deal with loss.

The Goethe-Institut Rome asked you to create a collective, intergenerational commemoration of the events in Onna. What was your approach?

I spent three days in Onna for the first time in autumn of 2018. Actually, I just wanted to see how the local conditions were and get to know the people and the landscape. But then I started work the very first day. My initial approach to gather material was intuitive.

Onna experienced two dramatic, terrible events. The first was in June 1944 when German soldiers massacred 17 people and destroyed one-third of the village. And then the major earthquake in L’Aquila exactly ten years ago on 6 April 2009 when 40 people died in this small village of Onna alone. How do the residents deal with it?

The inhabitants have stored both events in their collective memory. They commemorate the “martyrs” who were murdered towards the end of the Second World War. This trauma is not repressed, but it is dealt with openly. The same applies to the trauma of the earthquake in 2009, which is even more present as it is so recent. Ultimately, this pain that’s been left behind in the people is a central theme in my photographic work. It’s about pain that doesn’t diminish; that’s stored in the hearts and minds of the inhabitants.

What were special challenges for your work?

As a photographer, you’re taking pictures of the present. Photography is an art that depicts the “now.” But how can a photographer deal with things that are both in the past and difficult to grasp because of their complexity? The work that emerged in Onna reveals different levels: landscapes, portraits, symbolic images, historical and private photos. These different levels flow into the exhibition, as if they were all from one piece. Each picture is responsible for the next one, so that the portraits harmonise with photos from 1935. Ultimately, my work deals with the issues of pain and mortality. Time remains and forms superimposed layers. As an artist, it’s possible for me to make these different layers visible at the same time. The exhibition also presents touching or romantic images of everyday life in the village that contrast with the photographs taken shortly after the earthquake and the newly created portraits.

What most impressed you in Onna?

The people there are strongly affected by the experiences of the earthquake. Many lost family members; some lost their own children. Some were even buried for hours themselves. You can’t go through that without it leaving marks. I could see that in people’s faces when I photographed them. I was particularly impressed by how openly the people deal with these traumatic experiences. Also with how warmly I was welcomed there. Despite the incredible pain of losing loved ones and their homes, the residents of Onna look ahead. Their positive attitude leads to a great friendliness and openness. I believe that the people there have learned what’s really important to them.

The Goethe-Institut and the non-profit organisation Onna Onlus have been working for several years on a joint cultural project to contribute to the deepening of German-Italian relations. On the tenth anniversary of the earthquake in Onna, the Goethe-Institut asked the artist Göran Gnaudschun to produce a documentary about the past and the present of Onna’s village community based on photographs and archival material. The result of his work can be seen in an exhibition that will open on 6 April 2019 in the Casa Onna Community Centre.